Real Betis welcomes Real Sociedad in a match from the 1/8-finals of the Spanish Copa del Rey. We will examine this clash in the city of Sevilla in our vip soccer predictions today. 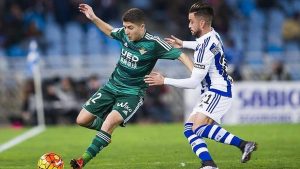 Real Betis qualified for the 1/8-finals of the competition after two wins over Racing Santander in the previous round. The Andalusians won the first leg in Santander with 1-0. This win was followed by a stellar 4-0 win in the second game in Sevilla. Antonio Barragan, Antonio Sanabria, Sergio Leon and Giovani Lo Celso scored for Quique Setien’s team.

We can conclude that Real Betis didn’t leave any doubts which one is the better team from the two. But now they will have a much harder task against La Real.

Real Sociedad reached the 1/8-finals of the Copa del Rey after eliminating another one of the elite teams in the tournament – Celta. The first game in Vigo ended with a 1-1 draw, while the rematch at the Anoeta was won by Real Sociedad with 2-0. Mikel Oyarzabal and Adnan Januzaj scored for La Real, pushing their team towards the 1/8-finals.

How are these two deams doing in La Liga? Let’s take a look.

Real Betis are currently 6th in the league standings with 26 points and a record of 7 wins, 5 draws and 6 defeats. They were in a good run of results, but in the last two games they won just one point – during the 1-1 draw with Eibar. In the previous round Betis suffered a 1-2 loss away from home against the weakest team in the league Huesca.

Meanwhile Real Sociedad are 11th in the league with 22 points won so far. La Real were in a very bad run of four consecutive losses, but this run ended with a thrilling 2-0 win over Real Madrid at the Santiago Bernabeu.

These are our vip soccer predictions today for the Copa del Rey first 1/8-final clash between Real Betis and Real Sociedad.